MayaYume's Mushroom Corner Let's all be random, shall we?

To show you all that I’ve recently gone back to the depths of despair that is Death Note. 30 Days is too much work, and too much spam for me. (Plus, I’ll be vacationing for a week, and internet won’t be a big thing to do, y’know?

So, Death Note 30 Day Challenge, IT’S ALL HERE, IN ONE POST.

Day 1 – Why you like/love Death Note

It’s not shallow. Seriously, it’s well written, well structured, and not cheesey like so many of the newer manga/anime. Just it comments on society and introspects on human nature, not to mention the art is excellent too. 🙂

I’m also forced to like it since it was one of the first manga I ever read. Heh.

Yagami Light. That’s right. Light is still my favorite character even after that disgraceful death. Why? He’s flipping dynamic, that’s why. In any case, I’ve always liked the anti-hero, and dammit, I think light fell off the edge of heroism by chapter 2. Besides, I love this kid’s name. 夜神 月? Night God Moon? My Chineseness showed through when I watched the anime with a few friends.

He’s pretty too, so that doesn’t hurt xD

Well, I liked the part where he lost his memories and became a good person. (This beat out when he killed Raye Penber and Naomi by only just a little bit.) The reason being, we got to see what his life would have been like if he never picked up Ryuk’s Death Note and it was a very telling collection of moments. QQ

Okay, it was also really funny too.

Refer to picture above. I loved the fake friendship between these two. It was hilarious, and the two smartest people in the world being childish and using violence to solve their differences just cracked me up. Besides, it’s nice to see L move.

I’d like to say Light, but… Ryuk. *cough* I’d be the person to start the problem, and lean back, and watch the chaos while I’m the one who has most of the facts. Trade in his apple obsession for something a little less healthy, and I’ve got a pretty good match.

In other words, I’m a Ryuk who eats like L. o.o

I hate this brat. (Especially his little finger puppets.)

But the final scene where he acknowledges the genius of L and Light made me forgive him a little. Just a tad.

I don’t have one. But fanfictions, there’s so many LxLight that I’ve learned to live with it… I guess that counts as something O.o

Day 8 – Most epic scene ever

I was all “OHFUCKNO.” QQ

Again, I direct you to the previous day.
Day 10 – Favorite screen cap

I was just kidding. I like this one the most xD

Matt. WHY DID THIS KID GET SUCH A SHORT LIFESPAN?

No brainer. Teru. Honestly, he’s the only one that had a logical background.

Or this beautiful thing by a fellow Canadian? QQ I DON’T KNOW.

I don’t even need to tell you what the quote is.

Misa: I wouldn’t dream of living in a world without light!

L: Yes, that would be dark.

… THE MAN WITH THE CHIPS. THAT ONE.

Raye Penber and his fill in the blank trick. It was lovely QQ

I would have to say…

FOR GOODNESS SAKE, YOU TWO ARE ATTACHED.

Those with the eye power of the god of death will have the eyesight of over 3.6 in the human measurement, regardless of their original eyesight.

I’m a Light supporter. I don’t know. I liked him first and that’s how it goes. I don’t switch sides easily (or at all).

He’s one of the most badass main characters that I’ve ever witnessed. :<

Day 29 – If you picked up a true Death Note would you use it? For what end?

LOL, I’d use it. I’m also the sadistic type, so I’ll likely write down gruesome and painful deaths for the people I don’t like.

That’s right; no delusions of justice, no lies about how I’ll use it for good. I’m going to destroy whomever I dislike and use it for my own profit.

Day 30 – What comes after Death Note? Your manga/anime recommendation with Death Note in mind.

YAY, Since I’m doing so many memes, I thought, ‘Hey! Why not make my OWN meme?’

Its full size is HUGE, so… xD

Meh, I’ll go do it some time later~

(Real reason for making meme; I is too lazy to do a meme this week~ *gets shot*)

May 8, 2011 | Categories: Memes, On General Socialization, On My Stuff, Photoshopped | Leave a comment

Yay, I’m posting a meme this week, even though I’ve just gotten back from band camp. But hey, I had this meme done even before the personification one >_>

The ‘Draw this Again’ meme! (I think) 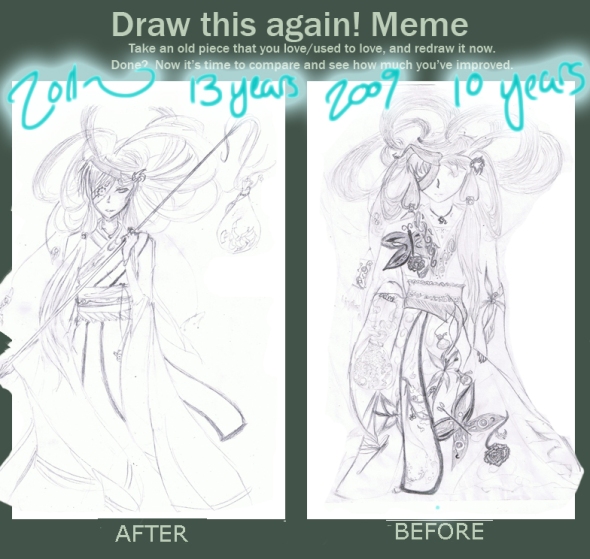 Gods, this meme depressed me… I’m such a fail nao ;A;

But hey, I have better proportion and fluidity now! >_>

Besides… it took a lot longer to draw the one from before anyway, and I was too lazy to bother =’D